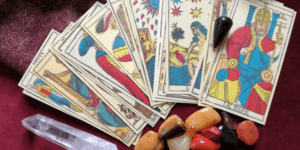 “About 3 months ago, I was feeling quite low. Things were not that great on the work front. Due to the constant worry about my career, I had niggling doubts about my capabilities and my self-belief. This led to a further downward spiral in my overall view to life. I was harbouring a pessimistic and gloomy world view and treated my colleagues and friends with skepticism. This pessimism also crept into my personal life and eroded my interactions with my family. I became irritable and frequently snapped at my wife and children. All this culminated into my deciding to finally seek professional help.

I got in touch with my friend Deepti who I knew had set up Healclinic and asked her for help. She guided me to meet a tarot reader who is a registered practitioner at Healclinic. Initially I had some misgivings since I have had a slightly skeptical view of such esoteric healing methods. Nevertheless, I decided to try it out, given that I had nothing to lose.

I was apprehensive since this was my first encounter with such a healer. However, the reader welcomed me with a warm smile which put me at ease. The atmosphere within the room was very peaceful and the feeling of wellbeing was heightened by the soft chanting of slokas that was being played in the background.

She sensed my diffidence and reassured me that everything would be fine. She began the session by sharing a personal example of how she had found a small flowering plant outside her house and had tended to the same, even when everyone else said that it would not flower. However, she persisted and visualised the plant as blooming, even when it was not. Sure enough, after a while the plant started blooming and this she quoted as a good example of how visualisation and positive vibes affect everything around us. We could use the same to enrich our lives and also those of our families and friends.

Read: How can Akashic Records help me

As the session progressed, she explained what tarot reading was about and that I should be open and share my thoughts in a spontaneous manner to derive the full benefits of the exercise. Gradually I began to loosen up and discovered that it was more a process of self-realisation that she was leading me to. Anjana made a few comments that startled me with their prescience and I realised that she did possess some intuitive power that made my thoughts accessible to her. This gave way to my feeling more at ease and confident to answer her questions about various issues that were troubling me and I started connecting with her.

The entire session lasted about an hour and at the end of the session, I felt light-hearted and assured that my way ahead was clearer now than before. I had sought some answers from her and she had astutely managed to elicit the answers from myself! This I think is a great knack that all healers, medical or spiritual need to have. I came away from the session in a much more confident, relaxed and positive frame of mind and resolved to put the suggestions of hers to practice.

Overall, I feel the session helped me to gain my confidence and cast away the self-doubt and pessimism that was pervading my intellect. I would strongly encourage readers who have similar issues to reach out to Anjana and healclinic for a very positive and encouraging experience.” – As told by a client

He put in the effort to get his mojo and direction, what are you struggling with? Call us at 8050003237. We offer online readings so you save time on travel.

Reiki Healers in PuneTheta Healers in PuneTarot Readers in Pune
The content on this website is for information only.
We do not provide medical advice, diagnosis or treatment. If in a medical emergency or crisis please contact a medical doctor / hospital immediately.

The brand 'Healclinic' operates under the company Simplimetric Consulting LLP, which is registered under ROC

Copyright © Healclinic.in
Learn how to set and stick to Healthy Boundaries and keep negativity out of your life
Register